Trash Can Show "Everything`s going - it doesn`t need any instruments!"

Unconventionally, the refuse collectors provide their audience with a breathtaking rhythm show focussed on bins and recycling.
Playing their main instruments - eight trash cans the size of 240 litres - tenderly but at full tilt they create sounds undreamed of combined with some spectacular choreography.

The band mates jump, kick, dash and throw the bins including the lids using sticks and loo brushes as well. On top of that, there is extreme groove which is somewhere in between latin percussion and ‘We will rock you’ - just as the German presenter Dieter Bohlen commented on the Groove Onkels’ gig in his TV show ‘Das Supertalent’.
Not only do they throw the bins around but it is also the Groove Onkels themselves who move along constantly beating former mayonnaise and ketchup buckets, oil drums, flower pots and bottles simultaneously shouting suitable German slogans. Of course everything is dubbed correctly within this rhythmic battle ground!

All in all, it is a splendid performance with a ‘load of rubbish’ which has its influence on the audience. It is left with mouths wide open, ears glowing, eyes sparkling and red-hot knee joints!

Book the ultimate percussion show that always works out fine wherever you want it to at: booking@groove-onkels.de 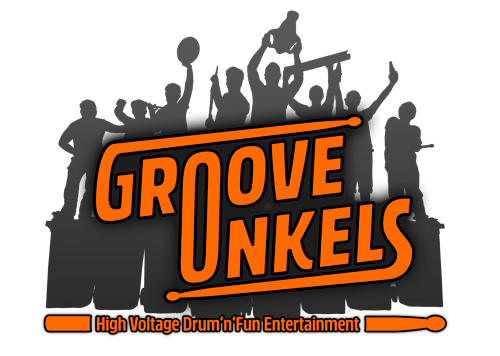 "Open Air at the Pumpwerk" - Wilhelmshaven 2014